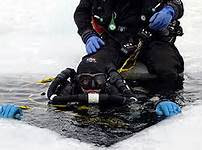 Brad Grecula could not see anything in the pitch-black water. Very slowly, something came into focus before him.

Grecula was looking at the Hopkins/Minnetonka shipwreck, which was once part of a fleet of six streetcar boats that transported people around Lake Minnetonka in the early 1900s.

When her sister boats were being dismantled and sunk in 1925, Capt. George Hopkins purchased it, renamed it Minnetonka and operated it as an excursion boat until 1949. At that time, it was sunk near her sisters north of Big Island. The state recognizes it as an archeological site, according to Maritime Heritage Minnesota.

As an outline of the wreck appeared before him, Grecula was sure it was the Hopkins/Minnetonka. After all, he and his friends had a GPS location on the shipwreck as they drove through a dense fog over the frozen lake, but diving through pitch-black water can mess with your mind.

“Your imagination can run away from you when you’re down there,” Brian Dahl said.

Divers going so deep that sunlight does not reach them can attest to what Grecula and Dahl are saying. What makes their tales even more harrowing is the only way they can escape the water is through a small hole in a thick sheet of ice.

Ice diving can be a deadly recreational activity if you are not properly trained and do not take the safety precautions seriously.

MyFox Twin Cities reported a story two years ago of a pair of ice fishermen hooking a scuba diver. The story had some comical elements to it because the fishermen thought they caught a big one. The diver was unharmed and offered a couple of beers as a peace offering, the fishermen told Fox news.

Dahl of Andover, Grecula of East Bethel, Art Gullette of Andover, John Oliver of Isanti and Nate Putbrese of Cambridge know this diver and this story was no laughing matter because several safety measures were not followed, they later learned. Ice divers are a fairly tight-knit group in Minnesota because there are so few of them, Gullette said.

The Professional Association of Diving Instructors is the not the only diving certification organization, but is the largest by far, said PADI spokesperson Bridget Evans. Over the last five years, more than 1,700 PADI ice diver certifications were earned throughout the whole U.S. In 2012, only 11.3 percent of all PADI certifications earned were for ice diving.

There are many safety measures to check off before going on an ice dive. The obvious first step is to make sure the ice is thick enough on which to drive a vehicle. Once on the site, they usually have a chainsaw to cut a triangle hole in the ice. They can cut a square, but a triangle takes less effort to cut because it has one less side.

They must be attached to a rope so they have an easier time finding the ice hole. Another step that can be taken is to clear snow in the shape of an arrow. Sunlight will highlight the arrow and give divers a bearing.

The most ideal situation is to have one person diving and another person on the ice in their gear in case the diver has to be rescued. There should be at least one and preferably two tenders in case both are in the water.

Ice diving is such a challenge that Dahl said PADI recommends a person have at least 50 dives before they can be trained.

According to Dahl, one of the most important traits he picked up from ice diving is the ability to remain calm and problem solve in tense situations.

A saying that stuck with Oliver is, “technical diving is the only sport where you can kill yourself and have half-an-hour to think about it.”

Gullette said this can be true of any type of diving, but the more logistically challenging the dive, the more true this is. There is a large difference between recreational and technical diving, he said.

Scuba diving in a river is beyond the level of most ice divers because “the current can take you into no-man’s land where there is no exit hole,” Oliver said. A second exit hole is a must for river ice dives, Gullette said.

If anybody feels nervous, a dive is called off without question.

Each of them has a different standard for calling a dive, however. Gullette is probably the most cautious, while Putbrese is the risk taker, to the chagrin of Gullette.

“When Nate calls it, I check my pulse because I may already be dead,” Oliver said.

Dahl, Gullette, Oliver and Putbrese know what a search and rescue feels like from the other side because they used to be volunteers for the Isanti County Sheriff’s Office dive team.

Isanti County does not have the budget for all the equipment so much of it is the diver’s own gear, said Chief Deputy Bill Guenther of the Isanti County Sheriff’s Office. Two men with their own gear recently volunteered to be the county’s only two dive team members, he said.

Although they may give Gullette a hard time for being such a stickler for the rules, he is deeply respected.

“I’ve done a fair amount of training through other instructors, but Art is hands-down the most thorough,” Oliver said. “It’s not that he wants to keep you there for an extra two hours. He wants to make sure you’re absorbing what he’s trying to tell you. I’ve told him before, when my daughter gets certified, he’s the one that’s going to do it.”

Gullette first tried ice diving in 1975 and he swore he would never do it again, but he decided to give it a try when he met Putbrese in 2004.

“Nate and I have an interesting relationship. I keep Nate alive. He keeps pushing my comfort zone and envelope and keeping it fun,” Gullette said.

While they gave Putbrese some grief, Dahl was quick to note that Putbrese is very experienced and “dive smart.”

Dahl met Gullette through work at the Minnesota Department of Corrections and started diving around 2005. Oliver started ice diving in 2008 or 2009 just a year or two after celebrating his 40th birthday.

Their schedules do not always allow the five of them time to get together when they are not diving, but when they got together for an interview at Gullette’s Andover home, there was a lot of reminiscing, laughs and some head shaking.

One story Gullette really wanted to tell was the first time that Oliver was the unexpected rope tender on the surface. Oliver was still new to ice diving, so Gullette was training him on rope tending. Gullette was diving and Putbrese was supervising him on the ice.

Gullette suddenly came up to the surface all excited, telling them he found a wreck and giving them the coordinates so they knew where he was going. When he was surveying the wrecked boat, he looked to his left to see Putbrese swimming up to him. It turns out that Oliver was tending them both, which really made Gullette mad at Putbrese.

Another interesting tale was about a fisherman throwing his wedding ring down his ice hole on Mille Lacs Lake. The Isanti County dive team happened to be training in the area and Putbrese volunteered to recover the ring and, of course, document it.

Putbrese taped his descent and recovery of the ring and posted it on YouTube. Search “Nate Putbrese” to find his YouTube channel and the video. When he sees the ring, you hear him gurgling “my precious” in homage to the character Gollum from J.R.R. Tolkien’s “The Hobbit” and the “Lord of the Rings” trilogy.

Then there are the stories of Putbrese pushing the envelope. One time Gullette got out of the truck and walked to shore with his cell phone in hand and watched as Putbrese gunned the truck across the ice.

Oliver said Putbrese has graduated from “rock, paper scissors” to flipping a coin to determine if they should walk or drive across the ice. He will often throw these coins in the water to make a sacrifice to “the lake gods” and to see how long the coins are visible.

Thanks to ABC Newspapers

www.kirkscubagear.com
Posted by Unknown at 6:42 AM