When Ian James Brown donned scuba gear to dive off the coast of Cozumel, Mexico, in December, his life had come full circle.

He had been an advanced rescue diver until a motorcycle crash in 2002 left him paralyzed from the chest down. While he had been used to helping other divers, Cozumel was his first open-water dive since the accident.

``It went great,” says Ian, who is from New Jersey. ``The whole experience was phenomenal. I was so confident underwater again that I was able to help others (including a quadriplegic). It was a nice experience. I had come back full circle and was able to provide help.” 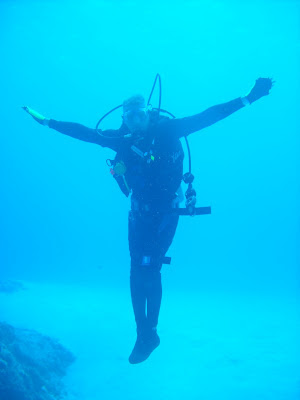 The trip was run by Diveheart, an organization devoted to boosting the confidence and independence of people with disabilities by introducing them to scuba diving.

For Ian, Diveheart’s mission meshed well with his own outlook on life. A 1st Lieutenant in the United States Air Force at the time of his accident, he knew he had two choices: Feel sorry for himself, or take control of his life and live it to the fullest, despite his injury. Without hesitation, he chose the latter.

``A lot of people have trouble adjusting. They have difficulty in re-identifying themselves,” he says. `They spent their life in one direction with one goal and all of a sudden that avenue is closed to them. Many go through a period of limbo. For me that was a short-lived time frame.”

Scuba was just one of his interests. He had also been a skydiver and was training as a pilot in the United States Air Force until that avenue was terminated by his debilitating injury.

Undaunted, Ian is moving on and will enrol in medical school this fall. He hopes to work with children with disabilities, including spinal cord problems, brain injury and diseases, as well birth defects. The specialty is known as pediatric neurology.

``I definitely want to go into medicine,” says Ian, whose original plan had been to try to get into aerospace physiology and work with pilots.

Ian is part of a group that is pioneering in the use of an ``exoskeleton suit” called the ReWalk that enables paraplegics to walk.

The exoskeleton suit has a sensor on the left side of ribs that measures the angle of the person wearing it. When he or she leans forward it triggers a step. The person is also fitted with a watch-like device that changes the mode of the suit. Modes include sitting, standing, walking and ascending or descending stairs. 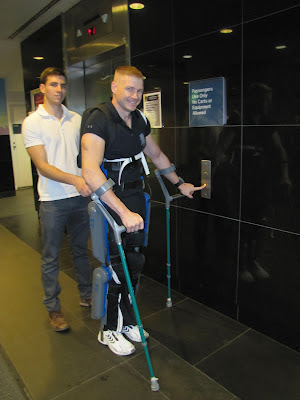 Ian says the device has been highly successful, with several people now walking in it. Its proponents hope to get people independent within the time frame of one month. It is already approved for use in a clinical setting. The next step is to seek approval for use at home and to certify helpers.

With or without the exoskeleton, Ian has been proactive in his approach to life. Among his post-accident experiences is stock car racing, thanks to an organization known as Accessible Racing that has installed a push-pull hand control system in cars for disabled veterans.

For Ian, who celebrates his 35th birthday in March, scuba diving has been a passion. But his long-awaited resumption of open water diving brought an additional bonus beyond the underwater experience itself.

``I was completely pain free. One of the most debilitating things is the pain. For me, the options were pain medications or (endure) pain. It (diving) took all of the pressure and pain off my back. It was euphoric. It took me a while to process what I was feeling, the lack of pain, the liberating feeling.”

The euphoria did not end there. ``It took a little time (after returning to dry land) before the pain came back.”