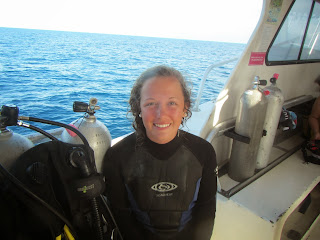 It was during a cruise on the family boat from Hamilton, Ontario, to the Bahamas that Tess Miller came to appreciate her parents’ passion for scuba diving.

Just eight years old at the time, Tess, from London, Ontario, had taken some scuba lessons before the journey began. But she first experienced the beauty and serenity of diving in Key Largo. They were waiting there to rendezvous with two other families who also had their own boats, before going on together to their Bahamas destination.

“We dove every other day. It was amazing. I found it so peaceful,” says Tess. “It is my favourite thing to do. Any problem you have is wiped away under water. Everything is so quiet and beautiful. The water is crystal clear and the fish are stunning. I was very comfortable.”

Charlie Miller, Tess’s father, says Pennykamp, a protected coral reef off the Florida Keys, was their prime diving site in that area. It has great coral and aquatic life. “We were two months in that area.”
One of the things Tess saw underwater near Key Largo was the Christ statue, 30 or 40 feet down. “It is life size or bigger. I couldn’t really tell.”

Later, near Staniel Cay in the Exumas, a district of the Bahamas with almost 400 islands, she dove with her family in the Thunderball Grotto, a rock formation with a huge opening. Popular with both scuba divers and snorkelers, it was featured in two James Bond Movies, Thunderball and Never Say Never Again.

“That is my most vivid dive,” says Tess. “There is a hole in the ceiling and the light that shines through made it surreal. The whole cave was filled with fish. It was amazing.”

Her other favourite dive is the shark dive off Paradise Island in the Bahamas. “It’s a planned event. You sit in a circle called a ring and there is a person feeding the sharks. They don’t bite the hand that feeds them.”

The boat trip itself was an experience. Originating in Hamilton, Ontario in mid-August of 2004, the first part of the trip involved navigating the Erie Barge Canal, which connects the Great Lakes to the Atlantic Ocean at New York. When they got to Baltimore they left their 53-foot vessel there for repairs, before continuing on. There were several other repair stops along the way. The southbound trip was made in segments of a week at a time. They arrived in Fort Lauderdale, Florida a few days after Christmas in 2004, before moving on to Key Largo.

From there they headed to the Bahamas, with their first stop there being Cat Cay to clear customs. Then it was on to Chubb Cay, 35 miles west of Nassau. Some good diving followed.

“We started to anchor out and felt we were remote. We were out for days just living on the boat,” says Charlie.
Nassau was the next stop to get provisions before heading south for the Exumas islands. “It (the Exumas) was magnificent. The beaches are unbelievable. They are like the postcards,” says Charlie.

There is an island there inhabited by pigs that swim out to meet boaters, who have been feeding them for years. “The pigs will come up to the boat and you can feed them,” adds Charlie.

The Exumas has a “land and sea protected park.” Fishing is not allowed.

Underwater, the Millers found an old shipwreck that was “crawling with lobsters.”

The family started to work their way home in May, beginning with restocking in Nassau. “Then we went out to Eleuthera, a really exclusive series of islands northeast of Nassau, where we dove some wrecks, Charlie says.

They reached Freeport by mid-May of 2005 before heading on to Fort Lauderdale. From there it took them just 21 days to get back to Port Stanley, Ontario, on Lake Erie’s northern shore. They accomplished that by running 10 to 12 hours a day, as well as some “all nighters.”

It was the end of June by the time they got home, but on July 15 they decided to take the boat north to Killarney, Ontario, in the North Channel.

“When we got back to London we were still prepared to go for another trip.”

Diving has been a long-time passion for the Miller family, beginning with Charlie’s diving certification about 30 years ago in the British Virgin Islands. He was the first to dive the 250-foot, steel-hulled freighter SS Wexford, which sank in a storm in November of 1913 eight miles off the Lake Huron shoreline from Grand Bend, Ontario. That discovery was made on Aug. 25, 2000.

Tess, now 17 and on schedule to finish high school soon, has now logged about 75 dives, of which 40 to 50 were on the boat trip to the Bahamas.

There will be many more dives for Tess. As well as easy access to summer diving in Lake Huron, she has passage to warmer waters much farther south.

“I have a 55-foot Sea Ray, full of dive gear in Nassau,” says Charlie. “It’s a great dive boat. We go down once a month from October to March. We have 10 special dive sites around Nassau.”

Access to great diving with her family has whetted Tess’s appetite for diving much farther away: “I would like to do some of the big dives, like the Great Barrier Reef in Australia, things that most people that dive would love to see.”